Three weeks ago, my family and a group of Cardinal Newman Society pilgrims were newly arrived in Rome — and what a contradiction we seemed!

The whole world was watching the Vatican, anxious to know whether the Amazon Synod would preserve or rupture Catholic tradition.

And yet there we were at the center of it all, full of joy and excitement, eager to celebrate the canonization of the great educator and convert, Cardinal John Henry Newman — much like the Americans who, 140 years earlier, had come to Rome to celebrate Newman’s elevation to cardinal and represent the jubilant Catholics back home.

Now we prepare for the Feast of All Saints, celebrating the greatest of all promises given by Jesus to believers, amid so much unbelief across the West.

While in Rome, I reflected on this irony with our pilgrims. I realized something very important: the timing of Newman’s canonization amid the ugly synod was just right, because Newman is just right for these times.

Specifically, it seems to me that Saint John Henry’s devotion to both teaching and defending truth, together with his beloved manner of “heart speaking to heart,” provide a powerful response to those who imagine that tending to the practicalities and particularities of pastoral care must be somehow opposed to upholding the timeless truths and traditions of our faith.

Some have even warned of schism over this error, but Newman’s example could help heal the rift — or if not, then at least the unassailable reason and precision of his many writings provide a mighty defense of doctrine. In this sense, our newly declared saint promises to be more a “doctor” of the Church than we might have anticipated.

Pope Francis has called the Church a “field hospital,” and today indeed there are many wounded — in part because of the Holy Father’s own inexplicable harshness toward those who would preserve ritual and reverence while embracing the reason that is married to faith. Today’s wounded also include young people — to whom Saint John Henry devoted his educational efforts — who have been greatly harmed by the lack of a strong Christian formation and by dissent, abuse and betrayal from within and without the Church.

After his conversion, Newman saw no conflict between his popularity as a pastor and his battle for truth. Despite being one of the Church’s greatest intellectuals and theologians, the Saint’s focus was always on the immediate concerns and controversies of the people under his care. His primary interest was the authentic formation of the souls right in front of him, always speaking heart to heart, always speaking truth. He was both a loving pastor and a champion of orthodoxy.

His life’s work, Newman said, was the fight against relativism — what he called “liberalism in religion.” He insisted on the unity of faith and reason, the intellect and morality, subjective and objective reality. He proposed faithful Catholic education, precisely because he wished to “reunite” the faculties of conscience and intellect that “man had put asunder” by original sin.

With this heart of an educator, Saint John Henry Newman was devoted to truth and to bringing others to the truth. That is what the word today so greatly needs!

Newman was also, at times, prophetic about the challenges we face today. Already in 19th century Europe, Newman saw the makings of what would be the “age of infidelity,” when the Church would be confronted by a culture unlike anything it had ever seen before: a culture that simply does not tolerate religious belief, except as a private matter. Newman also predicted increased scrutiny of Catholics by secularists, who eagerly seek evidence of hypocrisy. The sins of our priests, he predicted, would become a spectacle to the news media and disbelievers.

That’s surely where we are today — and yet, truly, Newman’s canonization was also a happy moment! One of the Church’s greatest intellectuals and a beloved convert is certainly in heaven. Saint John Henry Newman encourages and inspires the Church at a time when it is under sustained assault.

Sainthood itself refreshes our hope in the mercy of God and the promise of heaven. It is a great blessing to know that a dutiful and faithful man has received God’s great mercy and the reward of heaven.

By his canonization, Newman has become even more capable, by his example and because of our prayers for intercession, to help us once again follow the Kindly Light of Christ. Saint John Henry Newman, pray for us!

(This article is adapted from comments delivered in Rome on the day of Saint John Henry Newman’s canonization, Oct. 13, 2019.)

How This Catholic School Welcomes Children with Down Syndrome 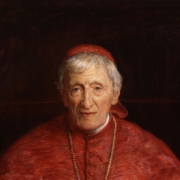